There’s a bit of a rumble in the writing community right now over an app called “Clean Reader,” and rightfully so. This app is designed to “prevent swear words from appearing on your screen,” while reading e-books. They promote it by saying, “you decide how books should appear,” which, as a writer, is pretty alarming. As you’ll see in my letter to them below, word choice is a huge part of writing. Using the wrong word can weaken what you’re trying to do, or change it completely. Since we’re dealing with swearing, say you have a character who never swears, and then at one point in the story this character is made so angry by someone that he or she yells, “damn you to hell!” That would illustrate how far this character had been pushed. However, a third party coming in and changing this to “Darn you to heck!” has now completely altered the intention of that line. Not only that, they have done so without the permission of the author, as they do not notify writers if their books are included on the list of books this app can provide. According to one of the articles that they link to on the Clean Reader site, the owners make a commission on any books they sell through the app too. This is super shady.

On the topic of word choices, they say in their FAQ that they have “discussed [the legality of altering book texts on-screen, even if not altering the original files] with several lawyers and they have all agreed that Clean Reader does not violate copyright law because it doesn’t make changes to the file containing the book” That doesn’t fill me with confidence. Did they actually hire these lawyers? I discuss things with people all the time. That’s not the same as paying someone to do due diligence. It’s a strangely casual word choice, and it makes me wonder if they’ve really investigated their legal standing as deeply as they should. If nothing else, it certainly illustrates my point about word choice nicely.

Swears exist. People use them. If you don’t like that, that’s your preference. If a writer has put a swear in a book, they likely had a very good reason to do so. If that upsets you, you can choose to not read the book, or to tolerate the swearing as part of the larger work. (Great works of art can often contain troubling elements – that doesn’t lessen their greatness.) To read a book with any words changed is not reading the book as the author intended, as you’re not reading the same book. And to go and try to impose this on any book you want because you don’t like swearing is another thing completely. To impose this on peoples’ books without their knowledge, and while making money by doing so, takes it even further. This all started because the creators’ daughter is an advanced reader, and read a book intended for an older audience that had some swears in it. Rather than using this to open a dialogue, or perhaps be more involved in their daughter’s reading process, they just decided to pretend swearing doesn’t happen by making it not happen.

Everyone’s values are different. A swear in a book is just a word. I’m fine with swearing, but I don’t care for people changing my words without my knowledge, so I’ve requested to be removed from their app.

To Whom It May Concern,
I have written five books for children, and only one of them contains swears. The sweary book is a book for teenagers. I chose to use swears because the book is about my own experiences as a teenager, and my experience was that teenagers swear. Sometimes a lot. To pretend they don’t is dishonest, and wouldn’t be believable in my story. Kids are smart. They’d know if I was trying to sell them a bill of goods by making everyone in the story speak in a squeaky clean manner.

While we’re on the subject of honesty, I don’t know whether or not my books are even listed in Clean Reader, since you don’t feel that it’s necessary to notify authors of their books’ inclusion. Yet you have no problem with censoring their words. (Yes, I know, you leave the original book file intact, but don’t kid yourself into thinking that what you’re doing is anything short of censorship. You are altering, whether permanent or not, the work of authors without their permission because you find certain words they use offensive.) I have not granted you any permission to change my words, and therefore request that you remove my books from your app immediately. If they’re there. Which they may not be. I don’t know.

It’s unfortunate that your daughter had an unpleasant experience with a book containing swears. It’s much more unfortunate that your response was to try to wipe swears out of literature entirely by way of an algorithm. I also teach writing, and something I tend to stress is the importance of word choices. If a writer chooses the wrong word in any given sentence, it can make a huge difference in what they’re trying to say. So I impress upon my students to think about each word they use, and to ask themselves if it is the right one for their intention. I could give you examples, but I don’t think you’re interested in what writers do, unless they swear. A lot of thought goes into writing, and to mindlessly replace words a program thinks is “wrong” with words it thinks is “right” is highly insulting, and negates the time spent writing a book, which can often be years.

We are allowed to disagree. But you are not allowed to alter my writing. Please keep Clean Reader away from any of my existing books. I may write some with swears in the future. Stay away from those too.

UPDATE:
The bookstore system powering Clean Reader has pulled out. I just got this email in response to mine:

In support of #authors #readers #books everywhere, the @Inktera bookstore system has been pulled from @CleanReader, effective immediately.

Your titles (or any others, for that matter) are no longer available within the Clean Reader app.
Let us know if there is any additional way we can serve you!!

My town paper did a nice story on me, and used some illustrations I did that were inspired by the ongoing train disaster. 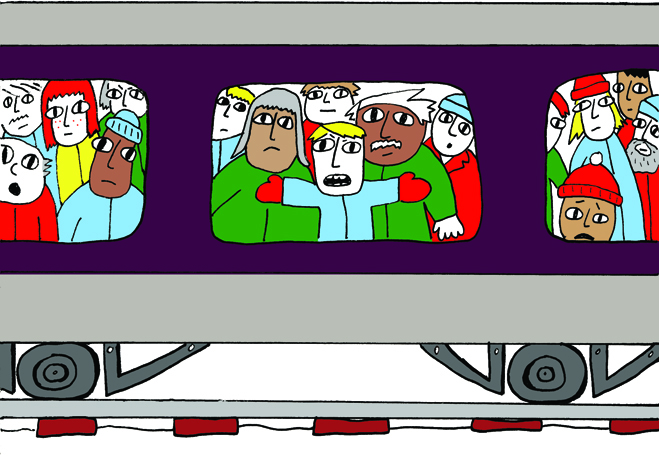 Here’s the interview I did on WGBH last night.

Worth checking out, even if you live somewhere with reliable public transit.

I’ll be talking about my MBTA haikus on Under the Radar this Sunday, March 8th, on WGBH radio. That’s 89.7 in the Boston area, or you can stream via WGBH’s website. (Click “Radio” at the top, and then “Live Stream” on the left.) It’s on 6-7 pm EST.

And if you’d like to read more of my haikus, you can buy my 2011 Haiku-A-Day book here.